Six sound sculptures of the ephemeral art of sounds tinged with the colour and the renewed light of modernity transmitted by the saxophone”. Music is an ephemeral art, unseizable, which must be recreated by performers time and time again here and now to be listened to and contemplated as it vanishes once more. When immortalising music in this CD, we feel we have created sound sculptures; our interpretation has become solid to leave six “sculpted” masterpieces of the ephemeral art of sounds. All the pieces included in this CD were originally composed for other instruments (violin, viola, clarinet, voice and piano). When interpreted with the saxophone, we stamp them with a new colour; a renewed light of modernity inundates these masterpieces of the chamber music repertoire of all times.

«Formed in 2010, the ÁniMa Duet is made up of Aniana Jaime Latre and Mariano García, both professors at the Music Conservatoire of Aragón in Zaragoza, where they have shared experiences with great musicians from all over the world. Aniana Jaime Latre has received comprehensive training in Sariñena, Madrid and Holland from pianists such as Rosa Mª Kucharski, Carmen Rubio, Anselmo de la Campa and Aquiles delle-Vigne. She also received advice from Josep Mª Colom and Claudio Martínez-Mehner. Since she was very young, she has offered recitals as a soloist and as a member of various chamber music formations in concert halls all over Europe, where she achieved great success and important academic distinctions. Mariano García, one of the most demanded professors of his instrument and sponsored by the prestigious Selmer Paris saxophone company, offers courses and recitals all over Spain, as well as in various Universities in the USA. He has participated in the Yantai festival (China), has been invited to festivals in Andorra and Italy and has been invited as a judge in international competitions.Passionate about his instrument, his tastes fluctuate between great chamber music of all times and contemporary music. In his training as a saxophonist he has received advice from Claude Delangle, Vincent David and Phillippe Bracquart and the influence and motivation of Jean-Denis Michat and Arno Bornkamp.

“…both musicians find in this beautiful repertoire a remarkable clarity and pureness in their producction Sculptures: energy and passion” Arno Bornkamp 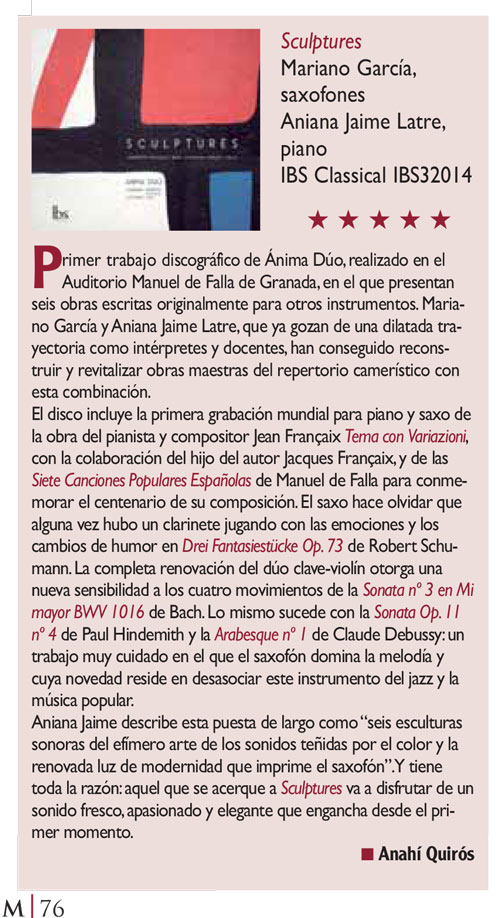